You Think It, We Ink It

The majority of us have a general idea of what screen printing is and maybe something about how it works, but do you know when it began and the specifics of the process?

This ancient craft has come a long way (which we’ll dive into soon), and Boulder’s Goodbye Blue Monday has been providing premium quality printed products for the past 30 years.

With state of the art technology, modern industrial equipment, and most importantly, our dedicated staff, we continue to provide outstanding printing services and quality to our valued customers. So without further ado, let’s learn some more about screen printing!

First indications of the process can be dated to 960 – 1279 AD, in China. Later, other countries of the Orient, like Japan, began using a silk, shellac coated, mesh stencil to transfer color patterns on various objects. Block printing and other techniques continued to advance as well as the silk screen process, but it was many years before this printing method would spread to other parts of the world.

Silk was a rare and costly material, so it wasn’t until the 1700s that European countries began screen process printing, and not until the 1900s that the process became widely used. In 1907, Samuel Simon patented the technique in England, which he used on wallpaper, silk, or linen for affluent English communities.

A few years later in 1910, experiments with photo-reactive chemicals including sodium and ammonium bichromate along with glues and gelatin compounds proved successful in creating photo-image stencils that would mark the advent of modern screen printing. Today’s process is much safer and far less toxic. 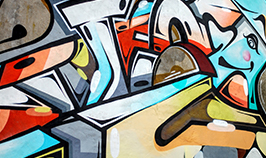 Finally, in 1960, Michael Vasilantone implemented the first commercial screen printing with a rotary multicolor screen printing press, which was used to print logos on bowling uniforms. Printing on T-shirts was just around the corner. During this time, Andy Warhol also made screen printing popular with his pop art images of Marilyn Monroe, a Campbell’s Soup can, and various other subjects. Since then, new technology has helped to make the process faster and more detailed.

How Does Screen Printing Work?

The traditional process started with a frame on which a piece of silk, or now polyester, was tightly stretched and adhered. This frame is the screen, or stencil. The polyester mesh is then coated with a wet, glue-like photo-sensitive emulsion and allowed to dry. An opaque graphic image, usually on a carrier sheet of clear polyester acetate or vellum paper, is then placed on the prepared mesh and exposed to an ultraviolet (UV) light source. All areas of the now photosensitive mesh not blocked by the opaque graphic image become hardened by exposure to the UV light. Once exposed, the carrier sheet holding the graphic image is removed. This area did not receive UV light exposure and is water soluble. The entire screen frame is then placed in a wash tank and the unexposed emulsion is rinsed away, the UV exposed emulsion remains intact. Thus, a stencil is made.

A T-shirt, or whatever product that is being screen printed, is placed beneath the screen. Ink is placed in the screen and uniformly spread across the image area. The ink is then pressed through the screen by the stroke of a squeegee, a flexible blade made of rubber or similar synthetic material. The graphic image is transferred to the substrate – cloth, paper, wood, metal, glass, etc. – and voila! The print is complete.

The more colors printed, the more detailed (and colorful!) a final product will be. Our screen printing department has a capacity of 14 individual colors and also includes various special effect applications such as gel, puff, glow, color change and several other specialty inks for even the most custom screen printing jobs. Our process has greatly advanced from the early beginnings in China, and we intend to continue providing our customers with the highest quality imprinted products available anywhere in the world.

For all your printing services needs, large or small, have confidence that Goodbye Blue Monday will produce exactly what you need, on time, and within your budget.

Contact us today for a quote on your next project.

Custom apparel you need, right when you need it.

The Word on the Street